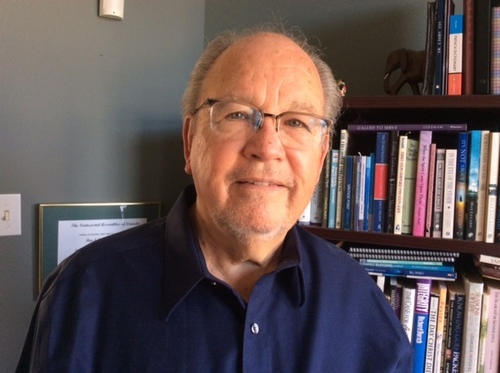 Stewart Hunter was born and raised in the southwestern Ontario community of Strathroy, located between London and Sarnia. In 1955, he attended the first Billy Graham crusade held in Toronto, Ont. Shortly thereafter, he and his parents left a traditional mainline church to become a part of The Pentecostal Assemblies of Canada (PAOC) congregation in Strathroy.

After receiving a Bachelor of Arts degree from the University of Western Ontario, Rev. Hunter underwent religious training at Eastern Pentecostal Bible College, where he met his future wife, Zelda Mae. They graduated together in 1965 and were married that same year. The Hunters have two children, Philip who now resides in the GTA with his wife, and Esther, who is married to Pastor Marvin Sinclair who currently serves on the staff of Woodvale Pentecostal Church, Ottawa, ON.

The Hunters have pastored in Dresden, Strathroy, Essex and Ottawa Bethel. Prior to moving to Ottawa in 1978, Rev. Hunter served as the District Director of Christian Education in the Western Ontario District. In 1983, he was elected to serve as the Eastern Ontario & Quebec District Secretary-Treasurer and two years later was elected as the District Superintendent, a position in which he served for just over eleven years. In January 1997, Rev. Hunter began his work at the International Office of The PAOC as the Director of Overseas Missions. He worked closely with the Canadian Churches to facilitate their overseas missions vision, as well as ministering to the family of missionaries located all over the world.

Rev. Hunter joined the Interfaith Committee on Canadian Military Chaplaincy in 1999, as the first representative of all of the denominations affiliated with The Evangelical Fellowship of Canada at the interfaith table. He served in this role for 13 years, retiring from this volunteer position in 2012.

Following the sudden passing of Zelda Mae in 2013, he eventually was remarried to Gudrun. Interestingly, she is the daughter of Swedish Global Workers, sent out by the Pentecostal Church in Sweden in 1946. They served in China until Mao’s Cultural Revolution at which time they fled to Sri Lanka where they ministered for 12 years, before failing health of Gudrun’s father forced them to return to Sweden.

Often you will hear Stewart say, “My goal at this season of my life is to ‘grow old, young!’”